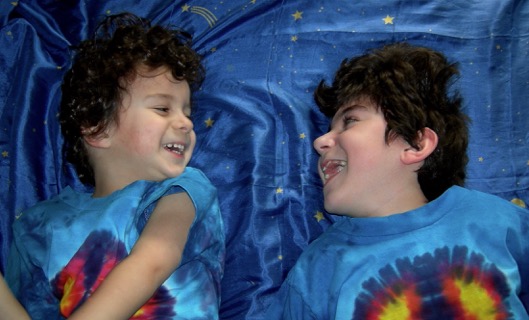 Benjamin loved his brother from the very first moment he saw Sebastian.

I’ll admit many of Benjamin’s classmates had siblings and I longed for my boy to have that kind of bond. But for awhile, Sebastian treated Benjamin like a piece of furniture.

I remember after Sebastian was diagnosed on the autistic spectrum, my brother James said, “At least you know he will improve.” I knew he was right, but in the heat of crisis that truth didn’t comfort me. It didn’t matter to me that Sebastian’s situation wasn’t like Benjamin’s- where doctors couldn’t do much and the average life expectancy was two years. I had two boys whose futures scared the hell out of me.

I’ve written about Benjamin and Sebastian’s bond in the past and how wrong I was about Sebastian’s actions and feelings, and I love it when he shows me how right my brother James was all those years ago.

One of the things John and I have been trying to help Sebastian learn is to think about others and other people’s perspectives. This is not a challenge confined to those on the spectrum, but autism doesn’t make our task any easier. I’ve discovered the hard way to accept that Sebastian will learn when he’s ready and I always have an eye for any indication that our efforts are paying off.

Yesterday was Benjamin’s 19th birthday. For all the obvious reasons, that alone made for a pretty incredible day. As Sebastian was leaving for school he said, “When Benjamin wakes up, tell him I said happy 19th birthday. Don’t forget.”

After he left, I did a little happy dance complete with a few fist pumps. It was so sweet to know he was thinking of Benjamin and wanted to be sure I relayed his message.

There are days I still worry about both their futures, but all that dissolves when I choose to focus on today.

I’m so proud of how far they’ve both come.

4 thoughts on “Best Birthday Ever”